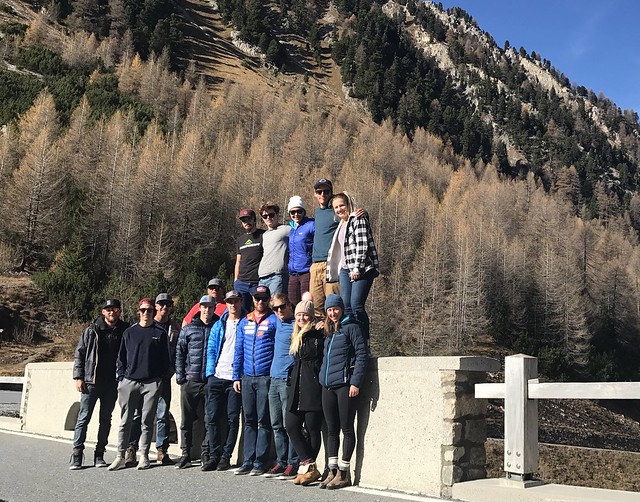 The preparation period for this year's BC Ski Team has been close to perfect. It began in April with a speed camp hosted by Alpine Canada at Panorama, followed by a four-day on-snow camp at Sun Peaks. In June there were 16 stellar days of GS and slalom on the Whistler t-bars - huge thanks to the Whistler Moutain Ski Club for making that happen! July and August were all about dryland training, also in Whistler, including lifting, running, hiking, mountain biking and yoga. Luck continued when the team travelled to El Colorado, Chile in October to train GS, super-G and a little slalom, all in flawless conditions! Then it was off to Hintertux and Stelvio in Europe for more unbelievable snow conditions and unmatched training opportunities. Antonia Wearmouth and Soleil Patterson will be starting their season late as they are recovering from injuries. Wearmouth had both shoulders surgically repaired this summer, and Patterson broke her leg training in June, but is expected back on snow later this month.

"This is always an exciting time of year for us," said BC Ski Team Head Coach, Nick Cooper. "This group has worked hard and really come together over the past 6 months. Our veterans were able to take advantage of the great training we've had all summer and have continued to improve, while the entire rookie crew has pushed to new levels in both their physical preparation and their skiing. We are now in Sun Peaks making our final push for the season with two 'warm up' races before heading to the Rockies for some Nor-Am competition. I know I speak for everyone when I say we are excited to get this season started!"

“I am very happy about how the team is coming together this year,” said BC Alpine Vice President, Johnny Crichton. “We have a group of fast athletes who have taken full advantage of an excellent prep period. I am particularly excited about Nicole Mah (Grouse/VST) and Frances MacDonald (Grouse/VST) who came to an invitee camp last year, and although they didn’t make the team at the time, they went back to their zone, got to work, tried out again this year and made the team. This shows dedication, perseverance and grit, exactly what we are looking for. We have an exciting team, hardworking coaches and a system that demands 100% effort. I am really hoping that our injured athletes (Soleil Patterson and Antonio Wearmouth) heal up quickly and are able get back to where they were and even better! Remember, get your platform early, stand on the ski at the top of the turn and bring shape to the gate…everything else will take care of itself.”

None of this would be possible without our top-notch coaching staff led again this year by Head Coach Nick Cooper. Ryan Jazic is back as head coach for the women's team and we are thrilled to welcome Morgan Pridy as men's head coach.

Please join us in congratulating the following athletes named to the 2017/18 BC Ski Team (stay tuned for updated bios and team photos coming soon):