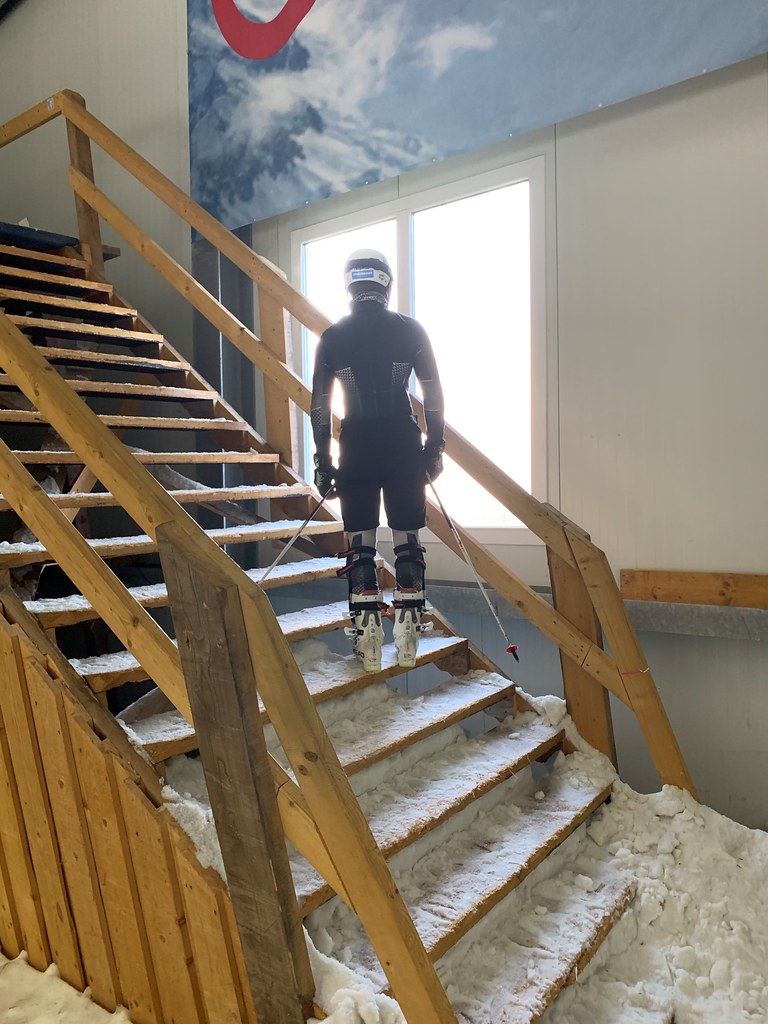 Marcus Athans in Wittenburg, daydreaming of skiing outside? 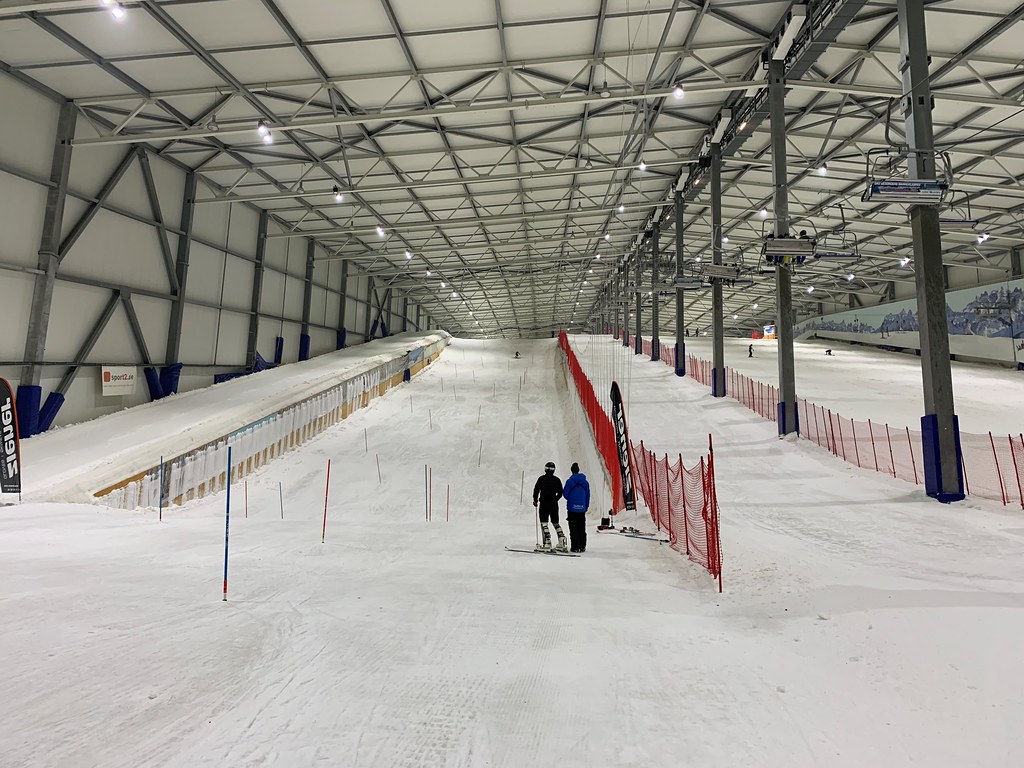 Inherent vice, Murphy’s Law, and one team’s voyage towards insanity...

It’s crisp, cool and clear. Looks a lot to me like it will be a perfect fall day. The mountain air is fresh and feels like an old friend whom I haven’t embraced in years. There is nothing quite like standing in the mountains to make you feel small in the best ways. It’s peaceful being in the clouds far above the flat land and valley people. A feeling of freedom that can rival anything this world has to offer. My eyes open, and I rub the sleep from them with the palms of my hands. It had been a good dream. As I wind through the hallways, down the stairs and then past reception the dream starts to fade. Every minute that ticks by makes it harder and harder to remember. Eventually I reach the staging area, and by the time I have my boots buckled down the dream is nothing but a lingering feeling, a foggy memory of a memory. I take a breath, open the door, and cross the threshold.

Since being pop cultured is still cultured, I think we can bridge any generational gap for this entry’s layout with one show: Star Trek. It seems like every age has had it’s own Starfleet captain to say the words “these are the voyages of the starship enterprise… Captains log, Stardate whatever”. If you are the one percent that doesn’t know Star Trek just imagine we are talking about Matt Damon in the Martian. Guy does a daily log to keep track of what he’s been up to while he’s stranded on Mars. If you don’t know that one try picturing Tom Hanks stuck on an island, but instead of him shouting WILSONNNNN, imagine he writes a journal to detail his days in solitude.

Wittenburg isn’t Mars, nor is it some undiscovered island, but it may as well be.
October 14th
Mid-Day and its wheels up with our direction pointing us towards indoorland. For once, “wheels up” being the apt term as the landing gear leave the ground and we partake in the modern miracle of flight. Similar to royalty, our team is split onto separate flights taking off from around the country. Dissimilar to royalty, we will all converge at Frankfurt and board the same little plane to take us up to Berlin. It’s been a short turn around from our last tour down south but beneath the mask of jet lag and terrible sleeps on the plane, I can tell the team is excited to get back to it. For some this is a new and different adventure, for others the memories of last season’s indoor excursion is starting to come flooding back.
Some notes on the Berlin Tegal airport: Don’t bother using it. A throwback to when single prop planes were new and exciting and blimps were trendy, it’s a flaked paint, chipped concrete complex that’s left the glory days far behind in it’s rearview. Per our title, this is where I first encountered Murphy and his piece of crap law. Wouldn’t you know it, but two bags didn’t make the connection. I always picture them being sad and lonely sitting on the tarmac under their own tiny personal raincloud. Bags go missing, this isn’t outside the norm and it’s nothing to be so upset about. Except when it’s your backup gates and equipment…
October 16th 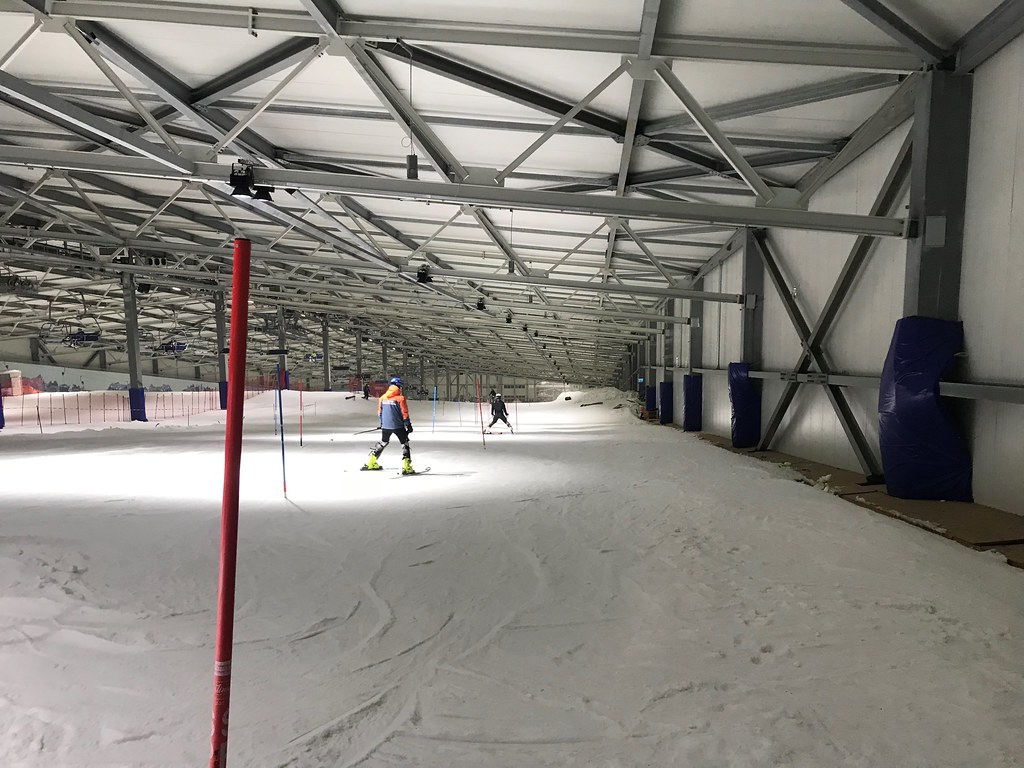 4:30 AM and the ceiling is no more interesting than it was thirty minutes ago. Jet lag is in full effect, and it would later be confirmed that that old hag has gone 9 and 0 against the team. Depending how you look at it, it’s a small blessing that indoorsville is no more interesting at 4:30 in the morning than it is any other time of day. As we approach session number 3 skiing in the void, the crew of the SS. British Columbia is looking more at home. It was not so long ago that a few people had forgotten to bring edges with them and slipped and slid down the piste. Now the sound of tears being cried internally was replaced with something more comparable to a toe drag and a quick stop on hockey skates as they maneuvered the ice with increasing ease. Pair that with the gunshots of gates smacking the ice and I’m sure you can almost imagine being there.
Our gates took on a lot of casualties today, shattered and cracked plastic to be collected throughout the session, but nothing to worry about yet. Our only drill battery charger that arrived did decide to combust though… Hopefully tomorrow is the day our bags arrive.
October 18th
The crew of the SS. British Columbia has begun to exhibit cabin fever type behaviors. It’s to be expected when undertaking a voyage in such a strange place, but it always makes me pause and wonder what’s going on in the minds of our intrepid crew. Currently only three of the nine members are still capable of sitting normally in the couches and chairs of the lobby. It began with slouching further and further down into the cushions until only your shoulders and neck are in the seat. It has now progressed to a combination of either laying across as many different chairs as possible (the chairs have arm rests…) or becoming progressively more inverted.Photo right: that's Ella Renzoni in the BC Team jacket inspecting the course
Yesterday the gate situation became dire. It took several hours of Mcgivoring, but we scraped together the two most bush league bundles you’ve ever seen and crossed our fingers that the gates would finally arrive. Of these 40 franken-gate abominations, we still had 2 proper-specification gates. The staff all felt somewhat attached to these two tough sons of bitches and after some debate decided to set them in the safest part of the course (safest for gates), the first gate. Second run they broke… RIP. 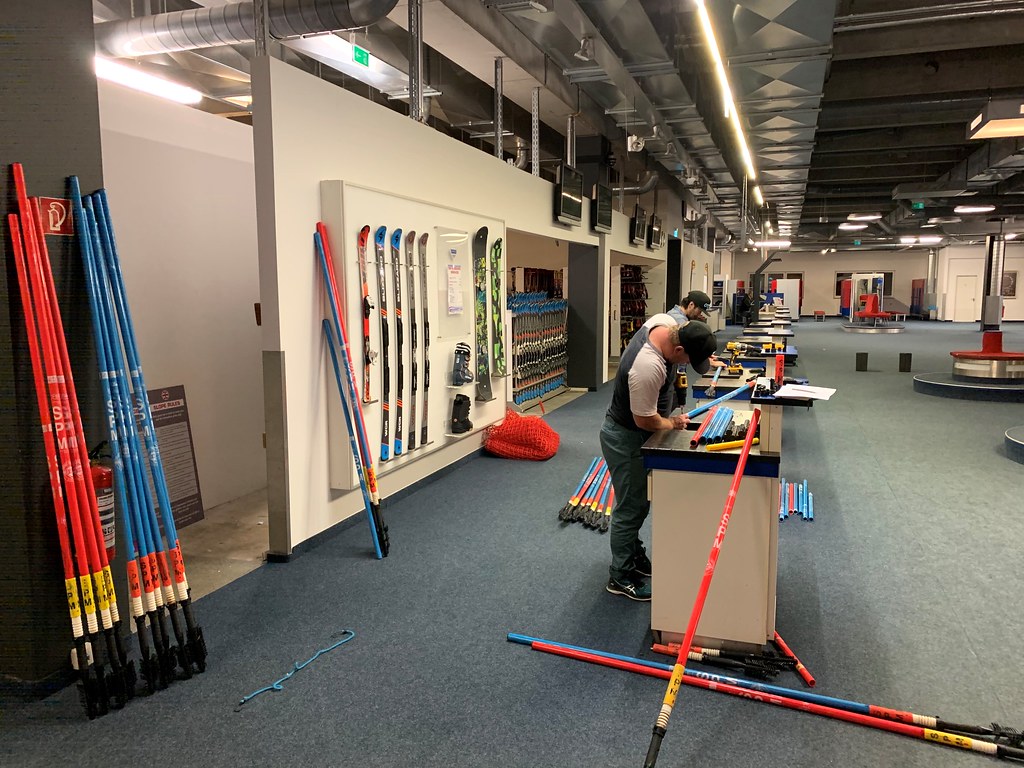 This afternoon the clouds parted over Wittenburg (I’m assuming they parted, I still haven’t seen the outside world, spare a few glances out the window atop the ski hill) and DHL hustled our missing gates into the lobby. I don’t think we have ever been so happy building 45 brand new gates.
October 19th
The new gates are all broken. It’s time to get off this ride for a minute and head to Berlin.
October 21st
Thank frick. Energy is returning to the crew as they take a few days of leave from Indoorstown and explore the wonderful city of Berlin. It’s not common that we spend more time than what it takes to drive through a place when we train abroad but with the unwritten but also universal rule that you don’t ever, EVER, spend more than 5 days indoors we broke the trip up with a stopover in the German Capital. When we drove into town we noticed that there were electric scooters littering the streets. Black and silver, lime green, orange, and bright red ones parked on every corner. It turns out the Uber style scooter scene is on and poppin in the east of Germany and that would become our crew’s preferred mode of transportation for the two days. It took exactly 5 minutes for them to start a scooter gang. I was informed by unanimous decision, the red ones were the most “litty”. Red it is. It was a little hard to take it seriously though because right after they tell you which to use they double up, hands on the hips of the guy in front of them and peel out to go find more scooters… 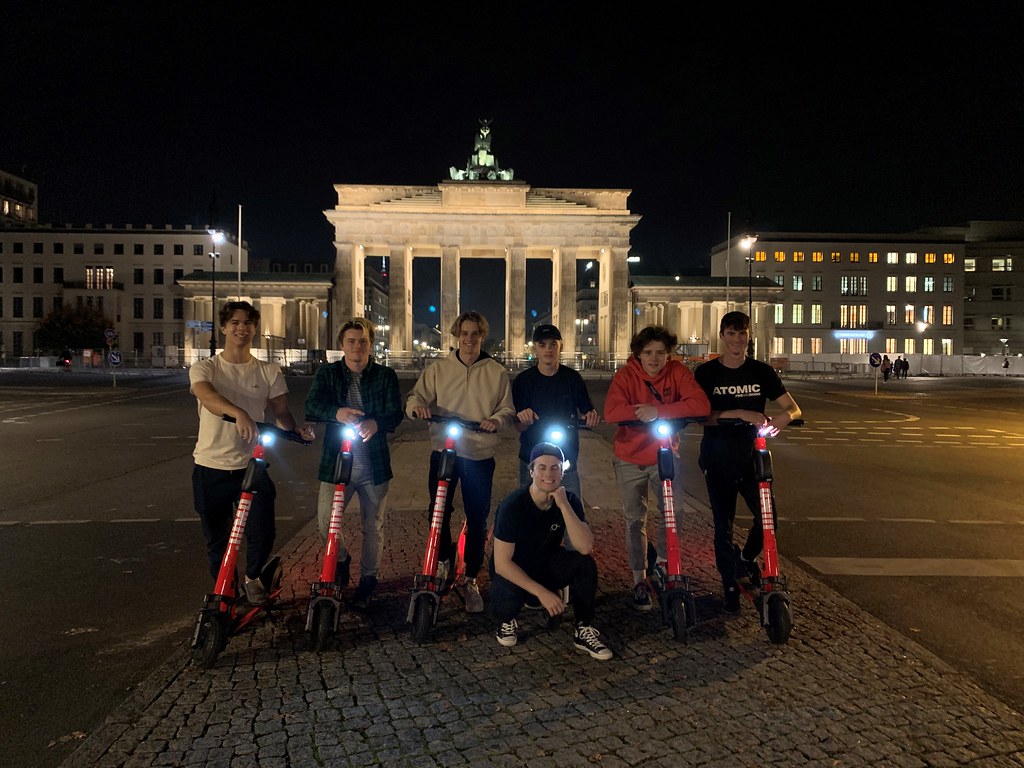 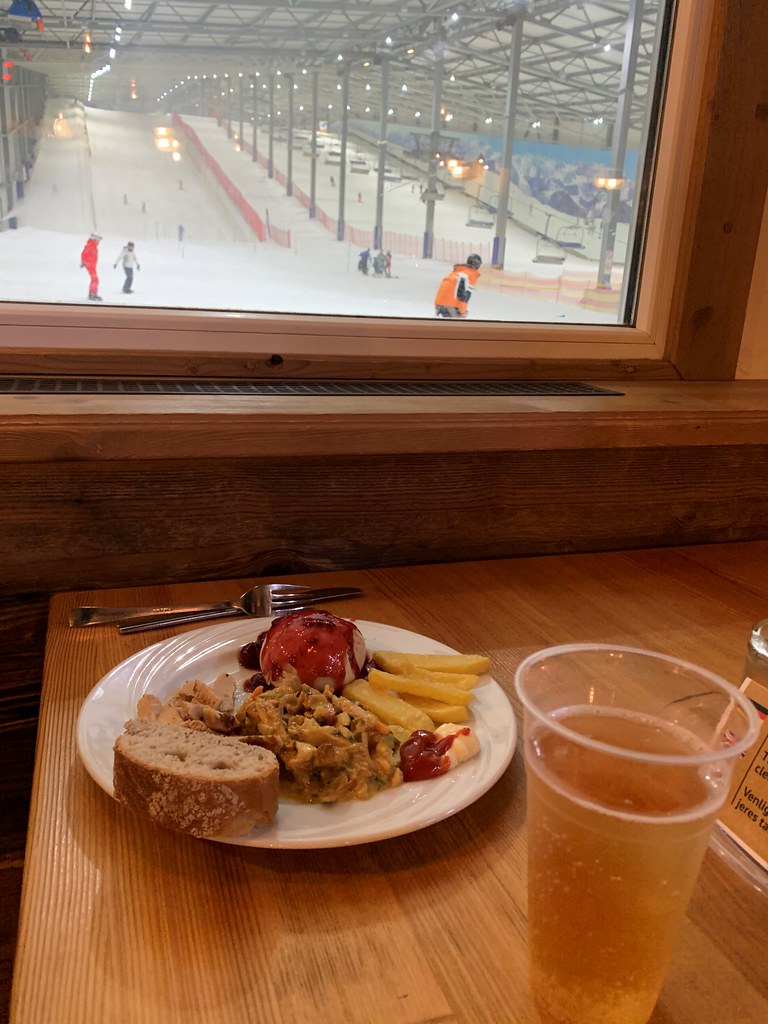 Shore leave is over and it’s all aboard for the second half of our adventure in indoortropalis. As recently stated, there is a well-known, unwritten, but universal rule stating never to spend more than 5 days indoors. We are breaking that rule, breaking it to the point of doubling it. You don’t flirt with physical disaster by any means, but you are definitely making the eyes at mental break down. Hitting on a bit of psychological disruption. Shamelessly laying down the mack on a little extra insanity in your life.
Routine is key to keeping a normal mental state. Structure goes hand in hand with routine. The sun rises, meals happen at similar times, the sun sets. Between that you find a groove and adapt a pattern that will suit your schedule and environment. Here in this unintentional social experiment, constants are removed little by little. The schedule has been the death of a real schedule with our two sessions being moved around constantly. Sometimes it’s 7-9am and 1-3pm, or 11am-1pm and 5-7pm, or even 9-11am and 3-5pm. The fluorescent lighting inside masks the actual hour of day, and each time you step inside into further inside it’s cold, the snow guns are on and it feels like mid morning. As you would imagine, this affects meal times, (something your body can easily recover from) but here lunch and dinner are identical food and your view is, you guessed it, the inside of the ski dome. Another reminder that it’s still noon, because it’s always noon, all damn day… On hill it’s a vacuum for variability, which is why we came so far just to use this steel barn on the flatlands of Deutschland. Skiing though is based on variability and it’s a great way to differentiate days. Oh, it’s sunny and the shadows are pretty big across the run. Oh, it’s cloudy and the light is flat. Oh, it’s windy today. Oh, it’s any temperature other than exactly minus five. Oh, it’s not precisely 72 percent humidity. Oh, the snow isn’t perfectly identical to yesterday. Thing’s blend together real quick when the only external change is the course set. Everyone humming Sir Elton Johns Rocket Man was about as fitting as it gets. Even if it’s for a week straight.

Photo left: Wittenburg dining...with a view...lunch, dinner, yumm?
Progress takes a touch of insanity sometimes. Notes on equipment: Our arrival back to Wittenburg coincided with the shipment of even more gates (yay), and our missing equipment (double yay). We are now playing a game where we are rooting for as many broken gates as possible.
October 24th
We have stopped playing the gate game because all our hinges are exploding. Also, the start for our timing system sheered in two today.
There was a ruckus outside my hotel room window this afternoon. Upon further investigation I discovered that our entire team was in the playground (which is shaped like a pirate ship). They had unintentionally scared away all the 6 year olds who it was built for and were now having a serious game of grounders. Chalk that up as a reason to smile.
October 26th
Final session, Final day, final minutes at indoorsburg. The crew finished stronger than I would have imagined. They looked a lot like a slalom team in there, something I’m sure a few of them hadn’t imagined was a possibility ten days ago. It’s time for these intrepid explorers to turn the ship west and head home.
Next up is the beginning of the real deal, the long march through BC and Alberta taking them all the way up until Christmas. They can lean back on these experiences and take confidence in the work they have done, and that no surface will be more icy than the last ten days!

~ submitted by BC Ski Team coach and blogger, Morgan Pridy